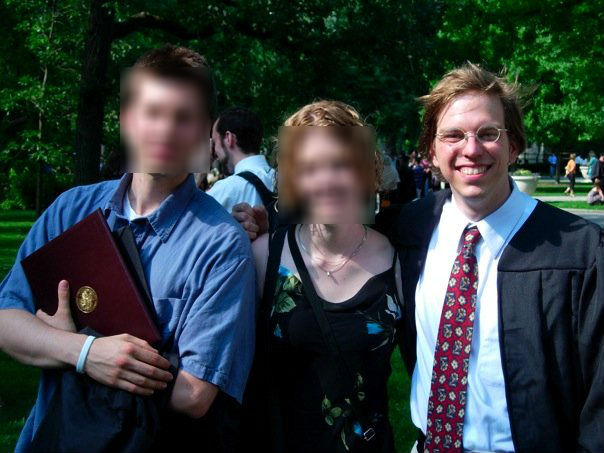 Your author, among friends of Peter

Forced to choose, would you rather be a “loyal liar” or a “truthful traitor” to your faith? That is, would you rather profess, or suggest that you profess, your church’s faith when you have yourself lost it or qualified it beyond recognition, or would you honestly acknowledge that loss and depart?

This is the question that structures Martin Gardner’s 1973 novel The Flight of Peter Fromm. Framed as a “found” account of the eponymous hero’s life by Homer Wilson, an atheist-humanist Unitarian minister and professor at the University of Chicago Divinity School, the novel derides the attempts to split the difference between loyal lying and truthful treason. Of one such naturalistic theologian, the narrator writes, his definition of God “automatically converts everybody to theism. Who can be an atheist if that is all that one means by “God”?”

Peter Fromm, arriving in Chicago in 1938 from a passionate Pentecostal childhood in Oklahoma to do battle with Satan in the belly of the modernist beast, is different:

“In every age, in every society, there has always been a small band of men and women of a different breed. They are blessed, or cursed, with a compulsion to take religion seriously. If they are atheists, they will have no part in religious ritual. If they believe in God, they will hunger to know as much as they can about what God would have them believe and do. Such was Peter.

This is what bonds the atheist Wilson to the fundamentalist protagonist. His seriousness did not shrink from its own consequences:

He was too honest with himself to suppose that the “good”–what one should do–can never be separated from the “true.” If nothing is true, said Nietzsche, everything is permitted. If something is true, some things are good, some bad. Is it true, is it really true, that God, through the agency of an historic faith, is calling on us, His children, to do this and this, to not do that and that? And if God has in truth revealed a strategy of living, what sort of Revelation is it? A book, a creed, a living church? How does the child of God extract from the Revelation a way of distinguishing this from that?”

Over the course of ten years of study, sexual liaisons, wartime navy service, and political activism, Peter loses his faith. His story, we learn at the start, culminates in a spectacular public breakdown on Easter Sunday, in the narrator’s own Unitarian church pulpit. And along the way, Peter encounters and sometimes adopts the views of the major theological and preacherly voices of the era, starting with Dwight Moody and moving through Chesterton, Barth, Kierkegaard, the neo-Thomists, the demythologizers, and finally dead-ending with Tillich and Niebuhr. It’s the story of one young man’s relationship with Jesus of Nazareth, with the stories of his life, and with his God (or the God beyond that God, if you will), as mediated by the ideas devised to make sense of Jesus, his stories, and his God for “liberal” and “modern” people.

A friend recommended this book to me when I was just starting at the Divinity School, and it took me quite a few years and an entirely new prompting to get me to do it.  It was, apparently, quite customary for U of C divinity students to read it once upon a time, and no current or former student can fail to summon up the geography of the quadrangles and Hyde Park if they do. The novel is serious and eloquent about its ideas. The satire stings. The names of faculty publications–The Vitality of the Christian Process, The Dynamics of Religion in a Changing World, The Psychological Frontiers of Religious Belief–are a running joke, intermixed invisibly with real journal and book titles. So are the sermons of liberal modernist suburban preachers (“Really–Life Can Be Wonderful;” “Life Can Be Wonderful–Really!”). Outside of the ideas and the experiences that refract and challenge them, the characters are not especially interesting, but even that felt at times like a wry commentary on the intellectual life of the University of Chicago. It can seem as though you are quite summed up by the things you study, the seriousness with which you study them, and the minor behavioral betrayals of that seriousness you inevitably fall into.

I should perhaps have listened to my friend. It would have been fascinating to experience Peter’s story as I walked the same halls and read the same authors seventy years later. Now, as a nostalgia trip, I could not help but be struck by how I followed the protagonist’s itinerary, so to say, in reverse. I showed up with the nervous breakdown already behind me and the alcohol and tobacco habits already in place. Some of my first, tentative steps out of teenage atheism brought me to a class on Reinhold Niebuhr, who, I was assured, had no particular interest in whether the physical body of Jesus of Nazareth was lying in a Judean tomb. Up until then my only exposure to theological writing was the Confessions and City of God of St. Augustine, works so Platonic, whose Christology is so deeply implicit, that I could scarcely have guessed the stakes involved in that assurance. What for the Oklahoma fundamentalist was an ignoble and indecent evasion was, for me, a sleight-of-hand that made Christian claims and ideas suddenly thinkable.

I didn’t stay there. If I were assured of a hundred more years to live I don’t know that I would ever read Niebuhr again. Part of the problem with the blazing sunset era of high Protestant theology was that its authors sought to provide us with a place to stand–where faith and reason, revelation and science all worked together–when all they could offer was a point of transit. From the perspective of one moving out of Christian faith, however defined, those points of transit seem feeble and dishonest. For one moving into it, they can seem necessary and providential. Christians have a tendency to ask for kinds of assurance, whether from theological faculties, great collections of bishops, or second-century papyrus, that none of these can give. Our needs and our doubts give shape to the theories of revelation or ecclesiology or whatever else that we may then point to in order to meet them.

I found myself wishing, as the novel neared its inevitable and wistful conclusion, that the story could continue through the developments in theology that followed its main action (ending in 1948) and its metafictional framing (late 1960s). Peter Fromm discovers Liberation Theology. Peter Fromm falls in love with a Mary Daly acolyte. Peter Fromm sits with the acoustic-guitar Jesuits and visits Willow Creek. Peter Fromm heckles Stanley Hauerwas. The questions that seemed so pressing, the methodological moves that seemed so inevitable, the historical and literary insights that seemed so assured and final would all change and sometimes fade. The narrator’s own confidence in the inevitable triumph of secular humanism would give way to the bitter realization that humanism’s ramparts are no more easily defended than those of the old orthodoxy. At one point we meet an ex-lover of Peter’s from his Communist fellow-traveling days. Then a faithful Party member, in the mid 1960s she has left its language game behind for that of Freud and psychoanalysis. Truths, like virtues, are mere naked beggars; if we manage to catch one, we dress it up after our own changing fashions.

Then again, as much as I would have enjoyed a Hoffmanesque hero wandering from one school to another over all the decades, it isn’t necessary. Religion writers have been documenting these struggles abundantly, once they blasted through the walls of the ivory towers and the boundaries of “mainline” Protestantism to echo in the schism, anger, and hurt that have shaken most corners of American Christianity. “Truthful traitors” and “loyal liars” are not quite what they used to be, now that every departure can be framed as an epiphanic rebranding, and every heavy-metal expression of orthodoxy is haunted by the imp of performativity. The theological patois of Homer Wilson’s day has not aged well, but at least he didn’t have to deal with the motive of believing in the physical resurrection of Jesus “to own the libs.”

And of course there are possibilities between loyalty and treason that Homer Wilson and Peter Fromm don’t explore. One can aspire to faithfulness in dissent or humility in belief. One can acknowledge that our own belief or rejection may not represent our mastery of the claims, but their mastery of us. Most of all, one can live and worship in a community that is not a projection of one’s own capacity to assent to any particular article of the Apostles’ Creed. Peter’s loss of faith, and his tragedy, were in that sense pristine: they happened in his own mind, reacting to Christian preaching and teaching he experienced only as a spectator. He was never abused or berated, nor was he nurtured and prayed for. It may be, in the end, just another evasion to point to Jesus of Nazareth embodied in the life and worship of his followers, but it is at least necessary for understanding what one accepts or rejects.

That was my experience, anyway. I can’t brandish the ashes that ended up accidentally on my forehead at Rockefeller Chapel, or the incense and chanting at Augustana Lutheran Church, or the patience and solicitude of the students and pastors I met, to ward off the questions that drove Peter Fromm mad. But they helped those bloodless ideas on Niebuhr’s pages pivot halfway into the world; they formed the ground under which Kierkegaard’s leap could begin. Once that happens, all you have to do is stay afloat.

← Doubting Thomas: Faith in an Uncertain Age
In and Among Us →

I’m a Lutheran pastor (ELCA, in case you’re interested) who has written on topics on religion, politics, and culture for Aeon, The Christian Century, Religion Dispatches, Pacific Standard, and other venues. I’m the author of Sacred Signposts: Words, Water, and Other Acts of Resistance, and I help edit Let’s Talk: Living Theology in the Metropolitan Chicago Synod. I serve Christ Lutheran Church in Dallas, Texas. Opinions expressed in my writing are, regrettably, my own.